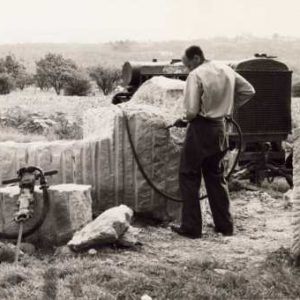 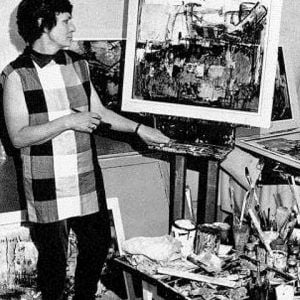 Margo Lewers in her Studio in the late 1960s

Margo was born on 23 April, 1908 in Mosman, Sydney. Having learned to type, she worked successively as a secretary, a cadet commercial artist with the Daily Telegraph, and with a small firm that produced handmade wooden articles with Australian motifs. She established her own studio and made pottery and hand-printed textiles. Later, she designed pots for R. Fowler Ltd.

Gerald and Margo met at Antonio Dattilo-Rubbo’s evening art classes in the late 1920s. They were married in October 1932. In 1934 they went abroad and enrolled at the Central School of Arts and Crafts, London. Gerald studied under John Skeaping and in the same year he exhibited with six colonial artists at the Cooling Galleries, New Bond Street. Margo worked on textile design, painting and drawing with John Farleigh.

In 1935 Margo established the Notanda Gallery, an interior decorating shop in Rowe Street, Sydney and continued to design ceramics and hand-printed fabrics. An active member of the Sydney branch of the Contemporary Art Society of Australia, Margo was a pupil in Desiderius Orban’s evening painting classes.

In the early 1940s Gerald took over the management of Farley & Lewers quarry at Castlereagh, near Penrith. During his spare time he carved animals and birds in wood and stone, creating a large number of realistic and semi-abstract sculptures. Sculptor Margel Hinder, a close friend, said that Gerald’s ‘love and understanding for the wood and stone of his own land, coupled with his sensitivity for the inner life of wild animals and birds, carried out with his assured craftsmanship, led to some of his finest and most distinguished works’.

In 1950 Gerald retired from Farley & Lewers to become a full-time sculptor, and the Lewers family moved to Emu Plains. Patrick White wrote that in ‘the house at Emu Plains ideas hurtled, argument flared, voices shouted, sparks flew. It was a place in which people gathered spontaneously.’ The poet J. D. Pringle recalled that guests ‘were rewarded by exquisite food cooked by Margo and a great deal of wine provided by Gerry’. Quiet and gentle, Gerald ‘always remained an all-round man – an excellent rider and bushman, a practical engineer who could turn his hand to anything, a skilled craftsman’. Margo gave an ‘enduring impression of warmth, tenacity, candour and intelligence’, although Pringle found her ‘slightly terrifying with her hoarse voice and black stare’.

A member of the Society of Artists, Sydney and of the Contemporary Art Society, Gerald took part in solo and group exhibitions. He helped to establish the Society of Sculptors and Associates in 1951 and was its founding treasurer. From 1953 until his death, Gerald received over fifteen major commissions, among them Relaxation, a reclining ‘sandstone figure of heroic size’ (University House, Canberra, 1953), and the sandstone relief on the York Street, Sydney, front of the Commonwealth Bank of Australia (1954). Gerald and Margo were jointly commissioned to create a garden of pebbles, cacti and sandstone shapes for the MLC Building, North Sydney (1957). He worked with swiftness and certainty, and later began to use metal, especially for public fountains.

From 1950 Margo worked in a variety of mediums including painting, textiles, sculpture and mosaic. She won recognition as a leading postwar abstract expressionist. Her early compositions explored colour and formal geometric abstraction; by the early 1960s her work had became more fluid and expressionistic. She showed extensively in Australia and in several international travelling exhibitions, received numerous public commissions (including the mosaic wall for the Canberra-Rex Hotel (1957) and the Aubusson tapestry for the Reserve Bank of Australia’s boardroom (1968) and won many awards and prizes.

In August 1962, while holidaying at Chillagoe, Queensland, Gerald was thrown from a horse and was killed. A major memorial exhibition of his work was held at the Art Gallery of New South Wales in 1963. Margo died on 20 February, 1978 at her Emu Plains home. She was honoured by a major retrospective at the S.H. Ervin Gallery, Sydney, in 2003.

Margo strongly desired her Emu Plains property to be left as an artistic hub and, prior to her death, began the process of bequeathing her home and collection of artworks to the local community. Through the generosity and persistence of her daughters Darani and Tanya, and with vocal community support, Margo’s wishes were fulfilled. The property and collection of artworks were gifted to Penrith City Council and in 1981 Penrith Regional Gallery & The Lewers Bequest was opened.

The Lewers’ work is represented in most national and State galleries, as well as in regional and university collections.