Gallery > About > Our Story > Architecture 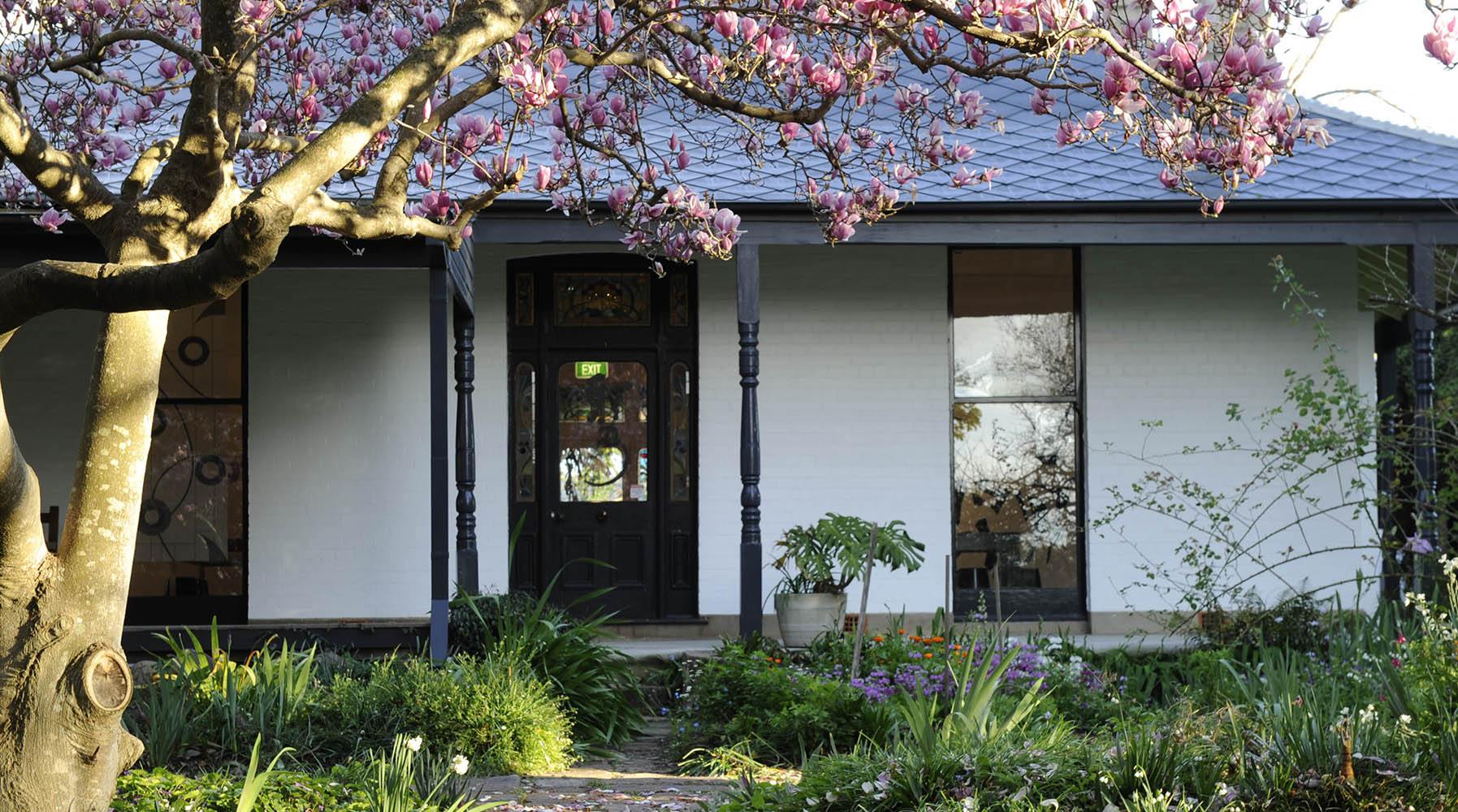 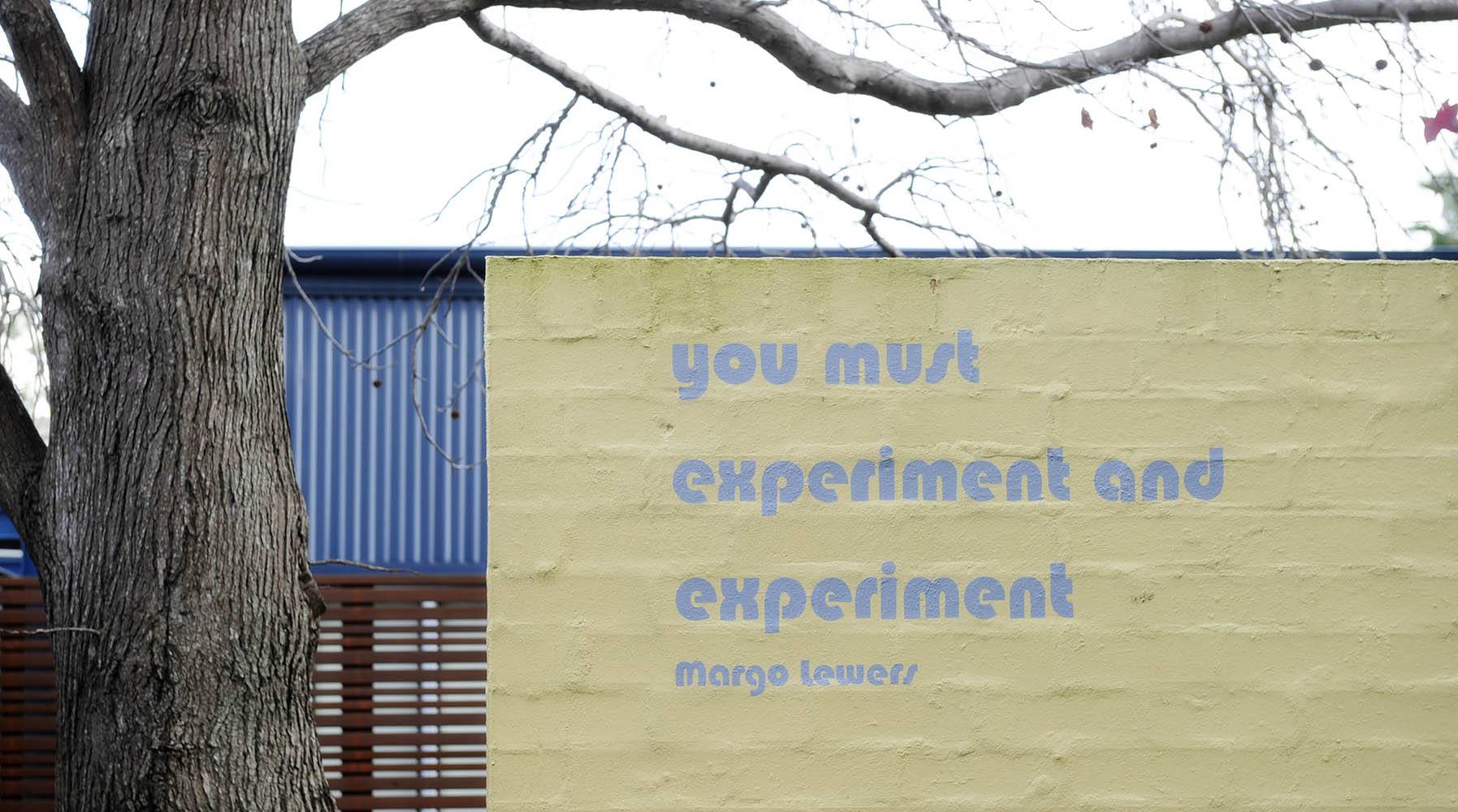 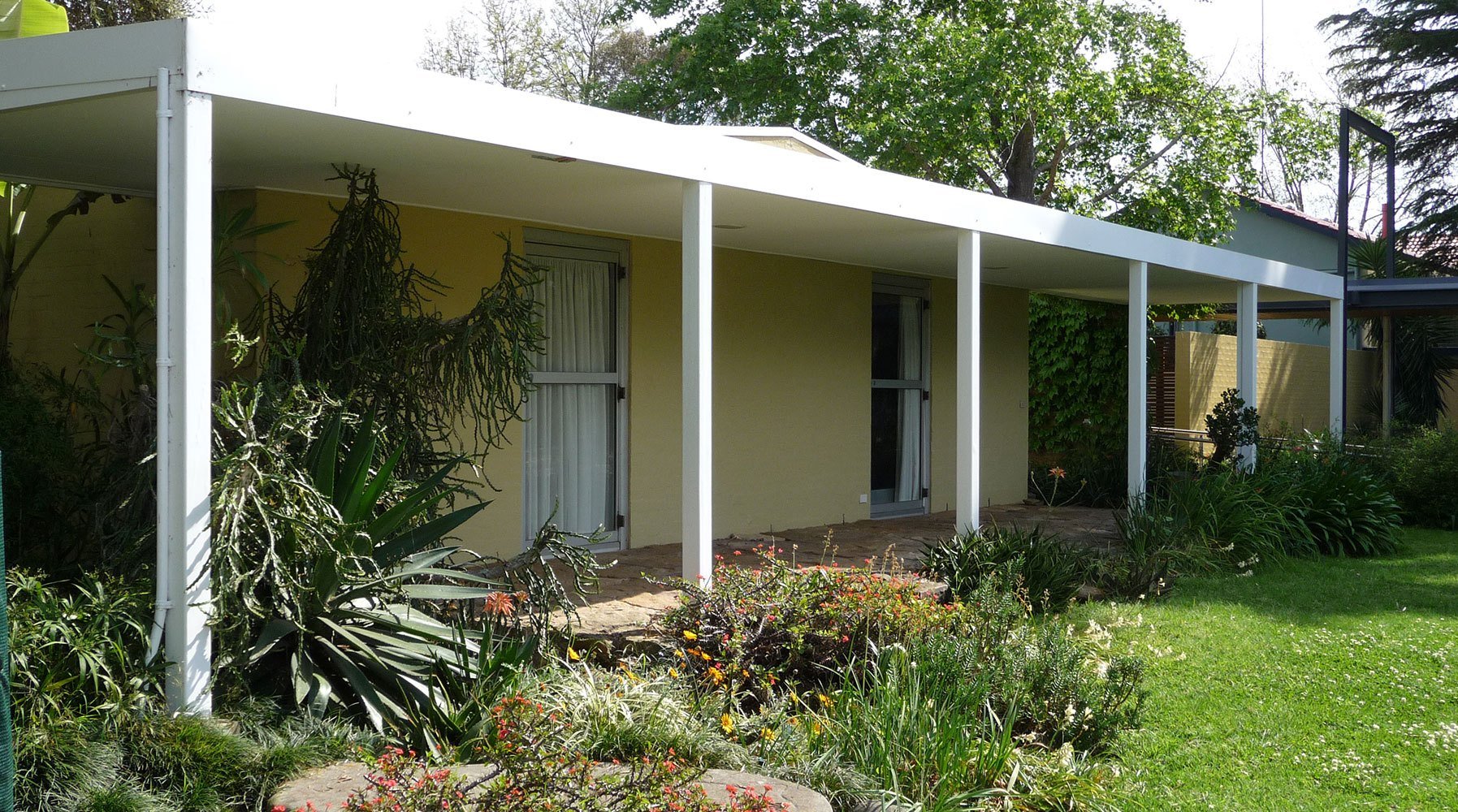 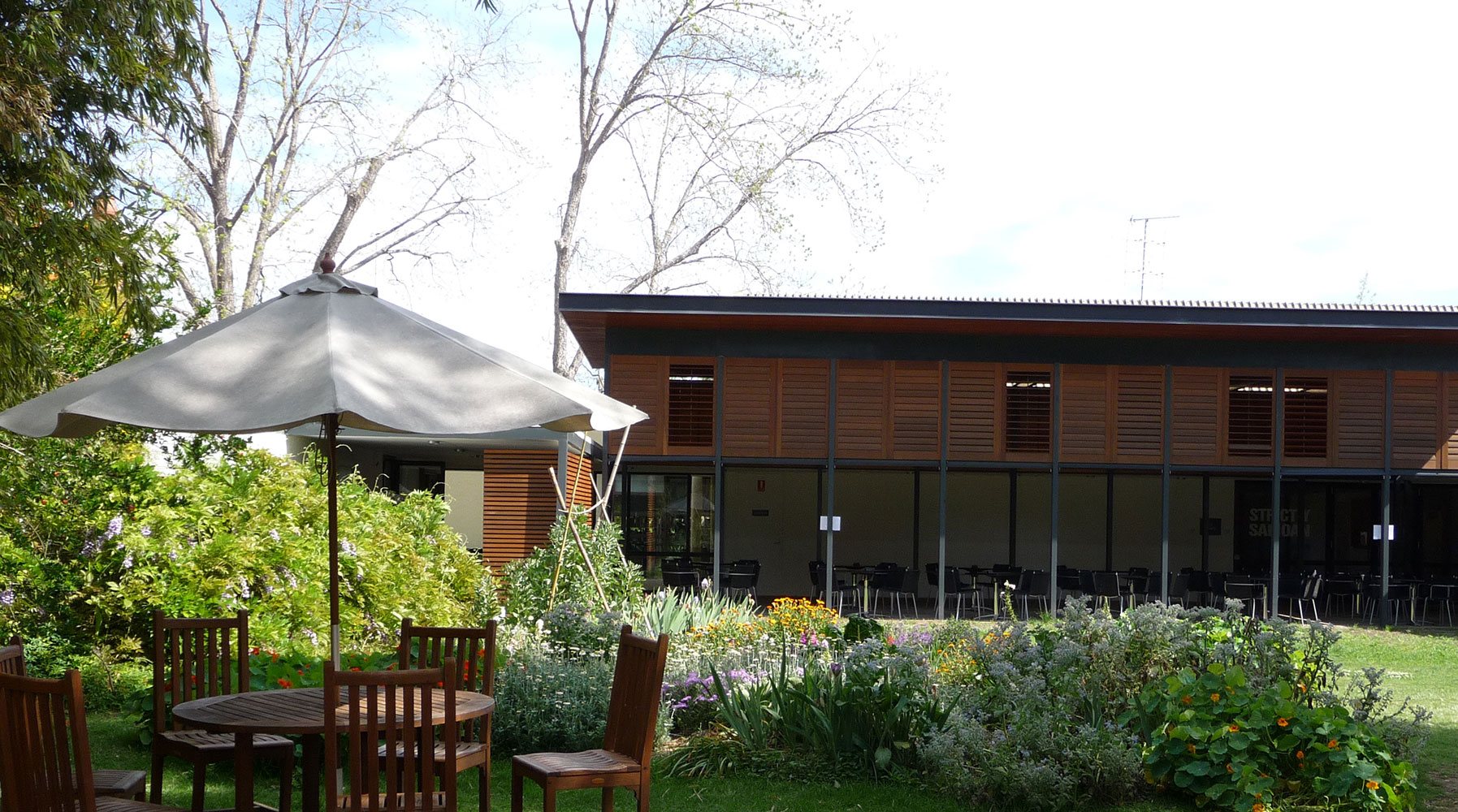 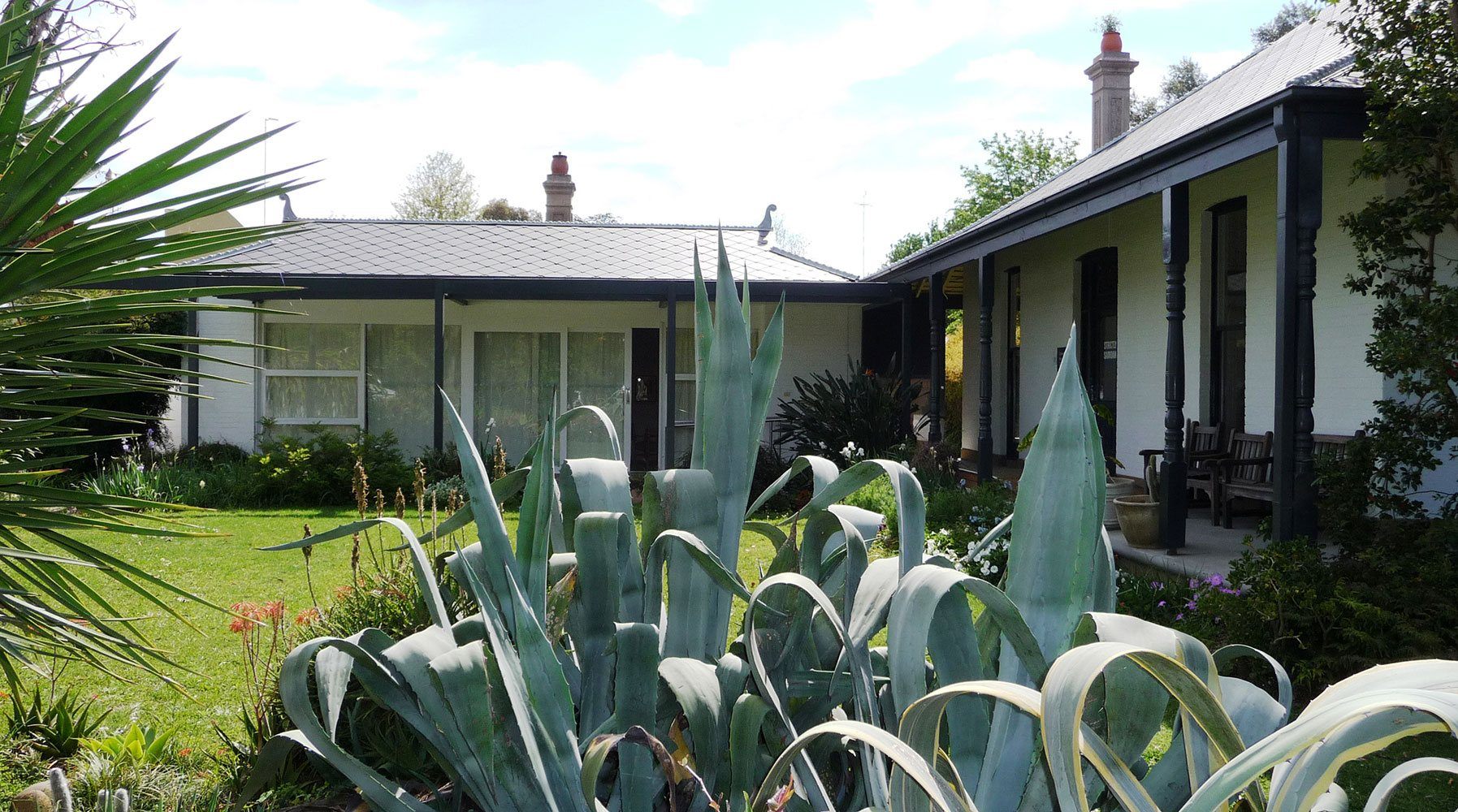 Ancher House, commissioned for Margo Lewers’ mother, was a collaboration between client (Margo) and architect (Sydney Ancher), especially in the use of materials and finishes, and the garden interface. It may, perhaps, have been a variation on the well-known first commission for an architect: ‘a house for the mother’. Margo’s mother, ‘Gilly’ Plate, died as the house was being completed.

The layout of the house is significant in that there are no windows along the south (only high windows in the bathroom), despite a fairly obvious need for cross-ventilation in the large combined living/dining room. Instead, the house had ducted airconditioning. Large, sliding glazed doors lead onto a flagged verandah, a secluded courtyard and a sunken garden to the north. The courtyard is enclosed by a high painted, or bagged, brick wall. The front of the house addresses the riverside outlook with glazed aluminium patent doors opening onto another roofed and stone-flagged verandah. This roof dissolves into a pergola at the southern side of the building, which becomes an architectural feature of the garden. The original drawings show pergolas bridging the space between the house and the northern courtyard wall and extending from the verandah roof to the garden – the same design approach as in the Lewers House living room.

In a way, this house and garden is a 1950s modernist response to the qualities of the old house: in contrast to the embracing nature of the old French windows leading onto verandahs and then onto gardens at Lewers House, the 1960s Ancher House has large glazed doors and single glazed doors (in lieu of opening windows) leading onto paved verandahs and adjoining gardens. Letters from Margo Lewers to Syd Ancher, together with the only surviving plan for the house, show that the design of Ancher House also closely resembles the renovated kitchen wing of Lewers House. Similarities can be seen in the glazing to the courtyard, which uses a similar timber and pattern, the use of pergolas on the front verandah (constructed) and the walls around the main courtyard (not constructed), and the proposed walk-through windows from the kitchen and bedrooms.

In May 1961, repairs were made to white ant-damaged timbers in Lewers House. Determined to avoid similar problems in Ancher House, Margo instructed Syd (in a letter dated 12 May 1961) to use aluminium for the windows and to remove all pergolas and window hoods. To provide direct access to the verandahs, the French windows became doors.

The manner in which the south wall of Ancher House forms a solid linear backdrop to the old vegetable garden area is an uncompromising modernist design statement. The long and low windowless rear wall acts as a stylish garden boundary wall and is barely recognisable as a house. Margo Lewers’ letter to Syd Ancher on 27 March 1961 reveals her influence on the design of the wall:

“Syd dear, I was absolutely delighted to receive the plans on Saturday. There are a few details. I would prefer the southern aspect (the one that runs along side) to have no windows. If Gilly is no longer with (us) when the house is finished I don’t want our neighbours to look at us. I don’t mind if the ventilation runs at ceiling height or through the roof. Also the opening on the northern wall (is this for additional light into the central courtyard, or is it just another exit?) I would prefer it blank.”

In this letter and others Margo also explains her attitude to downpipes and guttering:

“As you know I find gutters and downpipes unsightly, but you appear firm in this regard. Maybe there could be fewer and larger ones? Better still couldn’t we have a large feature, splashing water on top of a rubble sump? I quite definitely want aluminium or copper. I have acquired the price on copper (so far no price on aluminium) and I think it would be well worth the extra cost.”

“I still have bright ideas about a master downpipe splashing into a rock garden with a rubble drainage beneath.”

A copper downpipe was subsequently designed by Darani Lewers and installed at the end of the Ancher House front verandah, where it remains a wonderful architectural and artistic feature today. 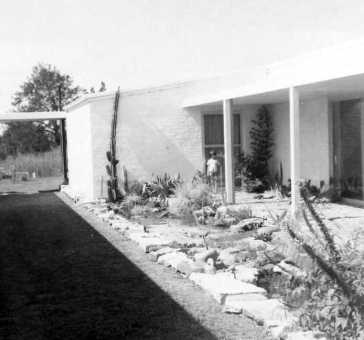 Lewers House, formerly known as ‘Bally Brack’ and ten acres of land were bought by Gerald Lewers in 1942.

Gerald Lewers retired from the family business (Farley & Lewers) in 1950 to become a full-time sculptor, after which the family moved permanently to the Emu Plains. Large separate studios were built for both Gerald and Margo Lewers, with Margo using one of the original bedrooms (nearest to the living room) in Lewers House.

To make the house more habitable Margo dyed cushion covers and hand painted the slats of the venetian blinds covering the house’s floor to ceiling windows. She and Gerald continued work on the existing garden, expanding its scope to include a number of new areas. As part of the Modernist ethos, both believed there should be no separation between art and life and that the interior and exterior should merge where possible. Different levels and discrete areas of garden were created around sculptures and fountains, contrasting shapes were placed alongside each other and rocks from the river were introduced. Courtyards, sunken pools, creepers and succulents gave each area its own identity as part of the whole – connected by paths and vistas. Throughout the garden different species were introduced and ingeniously arranged to enhance its 3-dimensional form and its relationship to the house and art works.

In 1955, when building alterations commenced under the guidance of architect, Sydney Ancher, the original living room was extended to include two smaller rooms. Large sliding glass doors were introduced leading to a rough stone paved area with a pergola – embracing the courtyard garden which was enclosed by a new wall on the west side. Gerald designed and installed a spiral down pipe at the west end of the pergola. A mosaic, complementing nearby garden planting, was created by Margo to hang on the outside of the living room. The living room looked directly across to the new succulent garden established around an existing jacaranda tree and adorned by climbing cactus.

The stone bathroom was formerly a primitive outhouse with a crude concrete floor and chip heater under the bath. The interior was modernised by Margo in 1955 when she installed the first flushing lavatory, tiled the walls, hung a Ben Nicholson painting near the basin and laid a mosaic feature floor. The formal geometric design of the floor is reminiscent of Nicholson and Piet Mondrian, and related to Margo’s later Plexiglas sculptures. This and mosaics around the living room fire-place, kitchen floor and outside the kitchen door were precursors to her large scale mosaic commissions in ACT and Western Australia. 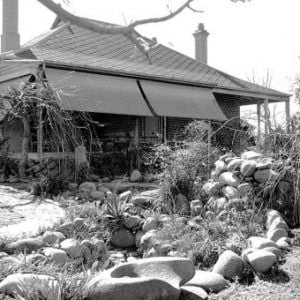